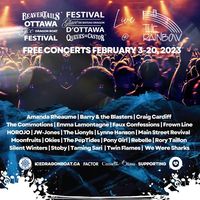 8PM EMMA LAMONTAGNE At a statuesque six-foot-one, it’s hard not to notice Ottawa singer-songwriter Emma Lamontagne but it is her emotive live performances, insightful songwriting, and soulful voice that has garnered her some well-deserved attention. Emma began turning heads in 2016 after winning RBC Bluesfest’s “She’s The One” competition, a Canada-wide talent search for emerging female artists. The “She’s The One” judges were captivated by Emma’s voice and her ability to deliver an emotive live performance. Her debut single “I Don’t Sleep” has surpassed 435,000 streams on Spotify since its release in July 2017.

Since winning the “She’s The One” contest, Emma has worked with some venerable names in the Canadian music industry, including Rob Wells (Sony ATV), 5 time Juno Award Winner, 5 time Canadian Classic Award Winner and Grammy Nominee Alan Frew of Glass Tiger (Capitol), as well as Robyn Dell’Unto (Fontana North), Kayla Diamond (Maple Music), BRDGS, Liza, DRMS (of SOMMM), and Ezra Jordan to name a few, allowing her to hone her craft even further. She has played Indie Week, RBC Bluesfest, and Canadian Music Week where she had the chance to perform for Linda Perry of the 4 Non Blondes.

Emma’s debut album - Uncomfortable Eye Contact - has amassed over 160K streams since its release in October 2019. She is the recipient of a FACTOR JSR grant, and an OAC sound recording grant. https://emmalamontagne.com

9:30PM RORY TAILLON Ottawa based alternative-folk musician Rory Taillon is bringing his unique style and dynamic voice to the Rainbow Bistro Friday Feb 17th. Taillon spent most of his time pre-pandemic touring across Canada performing his music to captive audiences and he is excited to be back performing live again. Rory’s latest album, “Drifting” dives deep into themes of loss, remorse, death, and dealing with mental illness. The subject matter of Rory’s songs exemplify a curiosity and a wisdom of difficult ideas that is beyond his years. Standing alone on the stage with his guitar and suitcase kick-drum, Rory has been known to take audiences on an emotional ride throughout his set from exciting and explosive highs to devastating and crushing lows. The classically trained singer can go from whisper to a rafter rumbling roar while painting heartfelt images with his words. http://www.rorytaillon.com