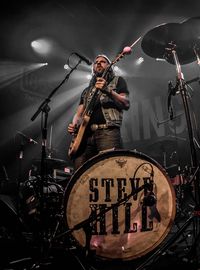 Widely considered one of Canada’s most prolific guitarists, Steve Hill has never stopped delivering wildly ambitious performances and satisfying original albums. Heralded wherever he goes, the guitarist, singer, drummer, harmonica player, songwriter and accomplished producer is a musical force to be reckoned with.

Forget the fact that he has won a Juno award, played concertos with Kent Nagano and the Montreal Symphonic Orchestra, won enough Blues awards to fill a bathtub and walked the boards of too many stages to count throughout his 27-year career, when you stop to hear his music you know you’re listening to the real deal. https://www.stevehillmusic.com