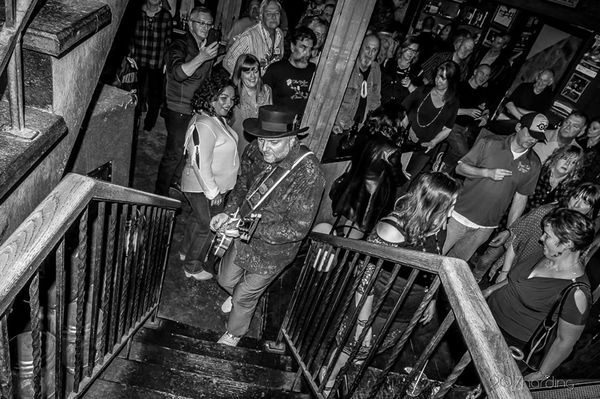 A History of Ottawa's Rainbow Bistro

It was autumn 1984. People in Ottawa were talking about more than the cold weather around the corner. A group of former bartenders and their friends were building a blues bar above the Café Crêpe de France in the ByWard Market. They were going to call it The Rainbow after a favourite haunt in Montréal.

The stage would be elevated and there'd be a dance floor, a decent house PA, and a bar you could see the musicians from. Since pick-up bars with some guy playing recorded music were losing steam, the idea of live music in a bar setting where you could dance – as a couple or a group or even alone  – seemed exciting. What remained to be seen, however, was for how long.

Opening night at The Rainbow was an invitational affair and, with an open bar, it wasn't hard to fill the joint. Ottawa band Fat Back Freddy took the stage. Although they were entertaining, they weren't quite the ticket it would take to put the bar on the map. Those shows would come in the weeks, months and years ahead.

Top-notch blues acts started to see Ottawa as an important part of their routing. The Rainbow was booking the likes of Koko Taylor, Son Seals, John Hammond, The Nighthawks, Big Twist and The Mellow Fellows, Marcia Ball, Albert Collins, Duke Robillard and so many others. (It would take pages to list them all.) And even though this was to become Ottawa’s “Home of the Blues,” programming would include rockers and folkies, alts and indies. Everyone from The Tragically Hip to Blues Rodeo, from k.d. lang to Tom Wilson & The Florida Razors were invited to play the Rainbow. Many have remained friends of the house.

Good acts cost money and seven days a week is a lot of live music. That's where the local, yet (at that time) under-developed music scene came in.

Although there was some talent in Ottawa in those days, few players had projects that they'd honed. There just weren't enough venues. The Rainbow seemed to be a boon, if not the reason for new bands to exist. Tony D showed up with bassist Big Ben Richardson, harp player Tortoise Blue, and their band, Saints and Sinners, which became a crowd favourite. Back Alley John was in the neighbourhood, hangin' around the Laff, and he introduced a young Drew Nelson and even younger Sue Foley to the club. Drummer Steve Lund was the bandleader of The Result before teaming up with Drew Nelson to eventually form the backing band for Dutch Mason. The branches of the Rainbow's family tree spread across Canada and throughout North America.

ALL PART OF THE STORY

According to Danny Sivyer, the Rainbow's owner/operator, you really notice the reach of the Rainbow during events like Bluesfest. “With that many musicians in town, it's like old-home week around here. From Colin James to Colin Linden, they all drop by to say hello and sit-in. They've all played here at one time or another,” says Sivyer.

It's a story that spans three decades. There's so much history and so many memories … many to be re-kindled, some to be re-enacted, and others yet to be realized. It's a story that continues decades years later, lasting longer than many would have expected,m with a showcase of the kind of acts that help keep Ottawa on the map when it comes to notable music scenes.